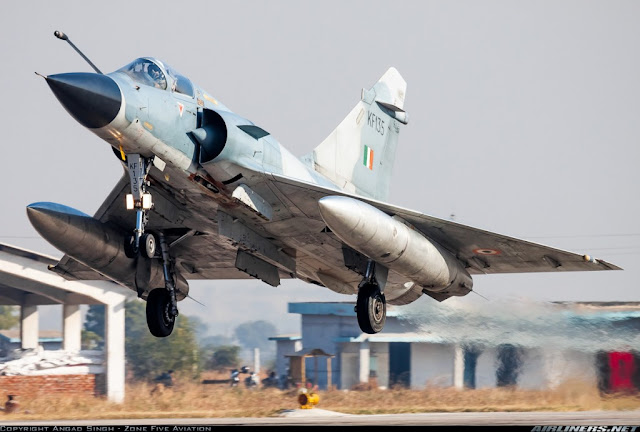 The Indian Air forces major problem is the less numbers of required Fighter jets and Failed back up plans, as their two Back up plans failed to restore the squadron strength, It looks like IAF plans to re think to look on the Qatari proposal of buying their Mirage 2000-9 fighters, and the Greece also shown interests of sell their Mirage 2000-5 Fleet. as Greece in major problem of no reserve money to run the government.

MiG 21, and Mig 27 is running behind the Schedule of the retired date, they even didn't have the capability of doing single mission in modern combat, IAF plans to retire them by early 2010 or at most 2012, with one major plan and another Back up plan, they almost in Talks with the government to purchase multi role combat Jets since 2000,  more than fifteen years still no progress of the Acquisitions, except missing deadlines and Bureaucracy sounds,  and another is the LCA Tejas, which is also in same scenario running behind the Schedule.

While some one says, If HAL completes a design and Suggest it to the IAF, the IAF change the requirements and ask for different model. not the entire air frame but some minor changes. ADA again spend  one or two years to design new and request the IAF to accept, But meantime , New Technologies were incorporated by foreign enemy air forces as new technologies  discovered. so Air force again changes it's requirements and design new one .thus makes the Program delay. But actually it's the history of Invention and emerging threats from foreign air force makes the outdated Fighter not capable to fight against the enemy.


as those two plans are almost dead, The Air force gets a option of spend some $2 billions for fighter Aircrafts, The IAF loves the Mirage very well, it proved well in the Kargil, so they need to upgrade those Mirages into newest standard. meantime they get another proposal from Qatar that they willing sell their mirages to foreign countries, Qatar has some 10+ Mirages 2000 all were upgraded into newest version along new Radar and New Engines. But IAF has only one plans buy the Mirages from Qatar and forget the Upgradation vice versa.

But interestingly the IAF decision makers took a good decision of upgrading the Mirage 2000 platform into most advanced Mirage 200OTH version, but yes the Mirage upgrade is too costly, same for the missile packages, the deal almost went more than $3 billions. and IAF already inducted those Highly upgraded modern Mirages into the IAF fleets. Interesting is the mirages service availability remains more than 80%. means almost all Miarges Ready to fly mode in all times,meantime the Indian made HAL Su 30 MKI service availability somewhere between 50-60 percentage.

As no clear path of Rafale procurement, IAF lost it's hopes over the Rafale's. also the depleting squadron strength also makes huge problems. so they look for second hand planes, earlier many of the  defense analysts raised their voice over the same concern and insisted  buying some retired F 18 fighters from the US Navy, Thus gives the life to IAF more than 10 years, means some 100 second hand F 18 can easily fill up five full fledged Squadrons, makes sense for depleting squadrons,

But for sake, The Greece is in heavy financial crisis, some western Journalists reports Greece may sell their advanced Mirage 2000 Fleets and stick with the F 16 only, the Greece uses those Mirages very well, the Mirage protected Greece Airspace from intruders and violators, early in 1996 the Greece Mirage 2000 engaged a Turkish F 16 and Shoot it down, later in the 2012 they did the same, again Turkey F 16 violates, The Greek Mirage Shoot it down, Just last week same kind of incident a Turkish F 16 flew near to a Greek controlled Island, within a minutes Greek Miarge 2000 dispatched and Chased the Turkish F 16, But didn't shoot it.

Both Qatari and Greek Mirages are upgraded and modern one, well maintained also combat proven, but which should come in a Handy price of some $7 to $12 million a piece, Qatar has some 10 Miarges and Greece has some 40 Mirages, with the combine price of some $500 millions makes that good deal, and another $500 millions for Ground support equipments and missiles makes the deal very good for stop gap measure.

But the Option is on the Ministry's Table, and they should take care of the IAF proposal.

Articles in your Inbox